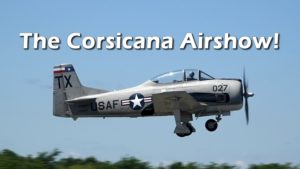 Mark your calendars for October 16th for the annual “Best Little Airshow in Texas” ,  when the Coyote Squadron of the Commemorative Air Force (CAF) hosts a fun-filled day featuring vintage air planes from the World War II era.

Texas T-Cart will be one of the featured acts at this show as Randy Henderson has the modified, clipped-wing Taylorcraft BC12-D dancing across the Texas sky.

Take a step back into history and enjoy a close-up look at these vintage aircraft as you walk through the various airplane displays, as well as experiencing the thrilling aerobatic demonstrations as these military aircraft from more than 70 years ago once again take to the air.

The Coyote Squadron, a unit of the Commemorative Air Force, operates from C. David Campbell Field, Corsicana’s Municipal airport, which itself began as a pilot training center during World War II.

Each year, dozens of vintage aircraft are flown into Corsicana’s airport to participate in this annual event. The participating aircraft, which are privately-owned or operated by other units in the CAF, are flown in and displayed during the air show. A highlight of the Air Show is the afternoon departure of all of the aircraft, one right after another!

For up-to-date details about this year’s event, visit the Coyote Squadron’s webpage at www.CoyoteSquadron.org.

Watch out for more information!